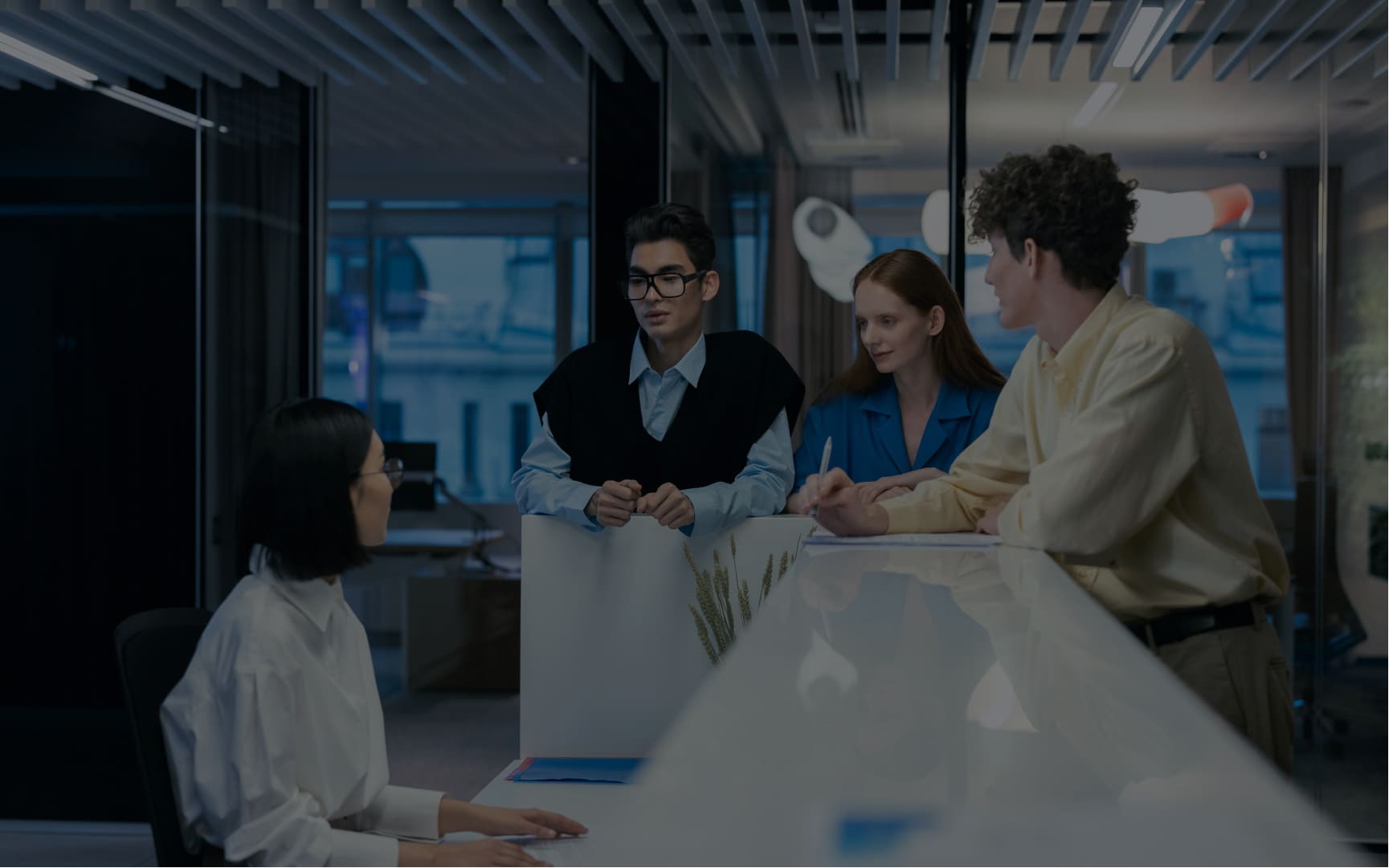 WE MAKE
TECHNOLOGY AN
ASSET FOR YOUR
BUSINESS 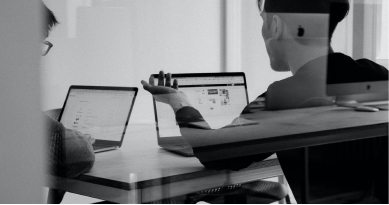 WE GET IT DONE

From initial concept to final product launch, Sunmait provides scalable solutions to maintain your competitive edge. We drive into your product vision from a business standpoint considering the possibility of changing requirements on the way to the finish line.
A wealth of technical and business expertise in E-commerce and FinTech along with a clear-cut development process helps the software products we deliver to stand the test of time and create new avenues for our partner’s growth.
About us

From the first prototype to a finished product, we take full responsibility for developing and managing the entire project.

Free up your time and stay focused on core functions of the business by handing over development of your software to us.

We study all the intricacies of your business and create a plan of what exactly you want to achieve as a result, emphasizing your company’s unique advantages. 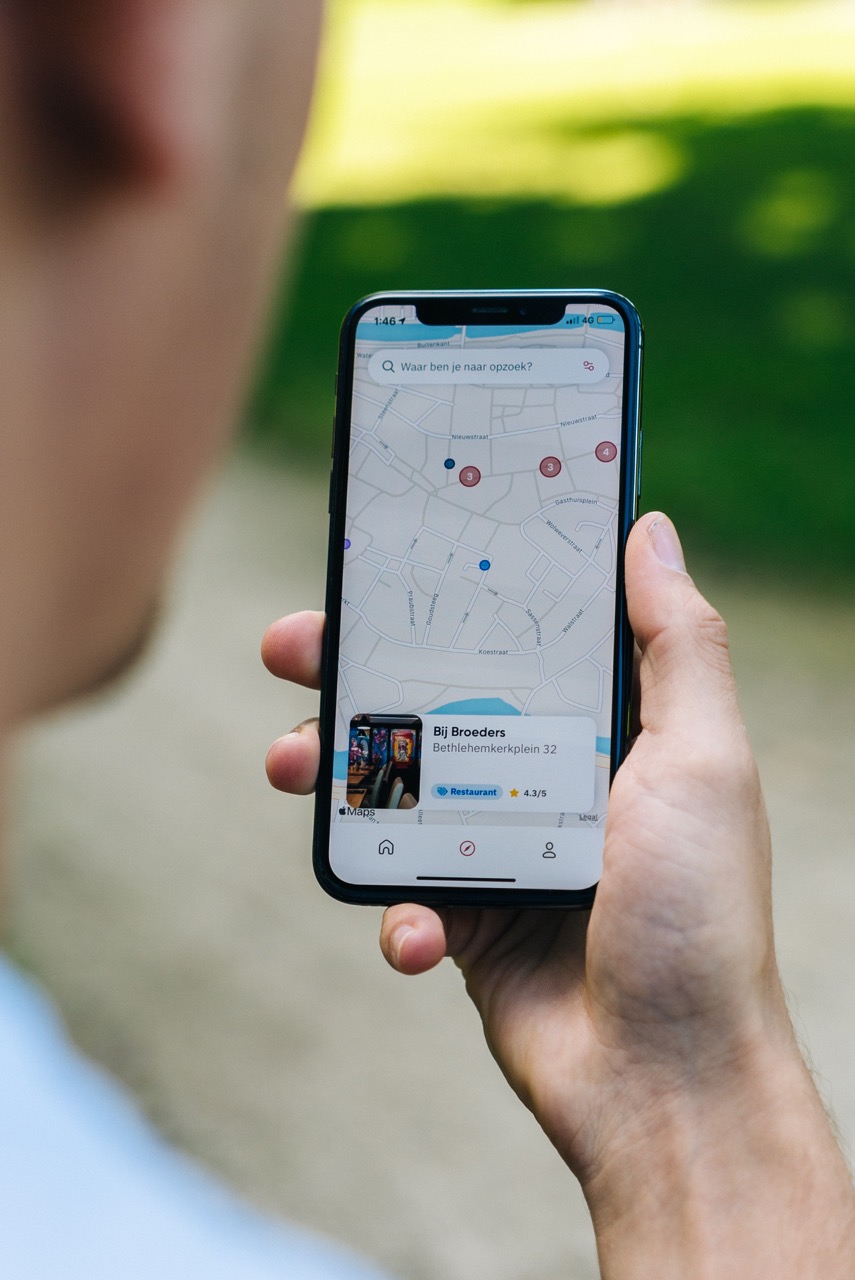 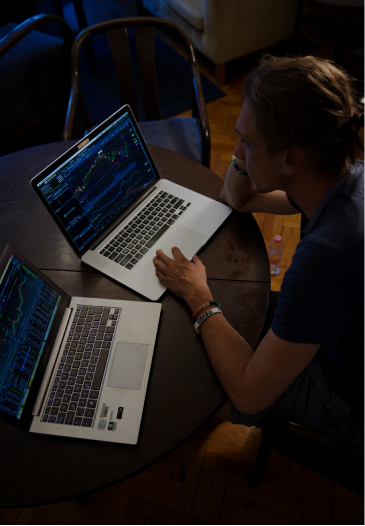 Gamified app for trading
VIEW CASE
VIEW CASE
MOBILE APPLICATION DEVELOPMENT
Extend the capabilities of your existing system to mobile or transform your idea into сutting-edge hybrid or native application from scratch with our technically adept team through the proven technology stack.
NATIVE
CROSS-PLATFORM
SWIFT
OBJECTIVE-C
KOTLIN
JAVA
Swift is a lightweight language used for IOS app development that is efficient in terms of speed and reliability. And if a product needs to handle heavy computations, speed becomes even more important. Besides that, Swift provides the tools and resources to build apps for every device in the Apple ecosystem, which allows opening the full potential of the hardware.
Objective-C, used to build iOS apps, is an approved and well-tested language with easy usage of private APIs and great compatibility with the parts of C or C++ code that can operate smoothly. It provides support from third-party frameworks and an extensive library of additional resources that has been in use by IOS developers for the last decades.
Kotlin with its clean language design and powerful features is used to develop Android mobile apps. It is fully compatible with Java and enables comfortable integration with all existing Java frameworks and libraries. At the same time, it allows less code and, giving an outline, is all about high readability and simplicity.
Build your Android application using Java that is recognized to be adaptable to the growth of mobile apps because it is open-source; this permits to make modular projects and reusable code. Also Java provides a great collection of open-source libraries that essentially reduces the total cost of creating applications and speeds up the whole procedure.
React-Native
Flutter
Ionic
React Native allows developing apps for Android and iOS simultaneously blazing fast performance. It provides such integrations as maps, analytics, push notifications, and others. Based on Javascript, known for its rich ecosystem and high popularity, React Native ensures optimal performance, code reusability, and a simple user interface.
Flutter helps to build apps in a more dynamic way by creating a single codebase that will work for both Android and IOS. Having one app for both platforms means less time spent on testing, thus, QA procedures are greatly simplified. Moreover, Flutter’s “hot reload” ensures quick bug fixes and shortens the time needed for adding features and changes in UI.
Ionic is an open-source framework licensed under MIT that ensures that less code and resources are utilized to build an app that runs smoothly on multiple platforms i.e. Android, iOS and windows. Being back-end agnostic, with connections to AWS, Azure, and Firebase, Ionic has universal components that pair with any JavaScript framework, including Angular, React, Vue, or no framework at all.
WEB APPLICATION DEVELOPMENT
Enhance the customer experience with your digital transformation by developing a custom web application that supports all the leading operating systems and cloud platforms.
Front-end
Back-end
React
Angular
Vue
React is the latest JavaScript library that provides ease-of-use, versatile applicability, better responsiveness, and greater stability allowing to create highly responsive applications. Thanks to its modularity and diversity of tooling and libraries, you can bootstrap a product with minimal resources, as well as use React to get software from small websites to large enterprise-scale systems.
In Angular, the UI changes are immediately reflected in the underlying data model which eliminates the need of doing lots of coding on the front-end. With Angular you can easily adapt available templates for your brands just by including some attributes. Dependency injection in Angular lets web components give dependencies instead of hard-coding. Having a more reusable code makes the components more scalable which makes it easier to test.
With Vue.js framework, It doesn't require much time to start development. Thanks to JavaScript nature Vue can be integrated with literally any app, written in JavaScript. It is adaptable and can easily integrate with existing projects and libraries. Also, the MVVM architecture that Vue.js uses is excellent for enhancing the UI experience. Basically, MVVM simplifies UI event-driven programming that improves system performance.
Node.JS
С#/.Net
PHP
Node.JS has gained substantial popularity since it’s a JavaScript-based server-side runtime environment that can be effectively scaled to handle thousands of requests per second without overly expensive and extra hosting costs. Today’s requirements for processing and consuming real-time information are paramount, and Node.js is exceptionally fast for multi-user real-time applications such as chats, streaming services, social media apps, or collaboration tools.
С# is an object-oriented programming language allowing to create modular maintainable applications and reusable codes. Also, C# runs on CLR that makes it easy to integrate with components written in other languages.
.NET is a free open-source software framework, notable for its multi-purposeness: it satisfies project requirements of any complexity, opens up space for easy integration with legacy systems, and makes deployment easier, reducing conflicts and minimizing performance problems.
PHP is a popular general-purpose scripting language that is easily editable and quicker to write, so it forms the framework for popular platforms due to its versatile nature and lightweight. Using PHP, you can get a wide range of free services, including frameworks, libraries, code, documentation, programs, scripts, and more to build applications in less time, reducing the time-to-market cycle without putting in extra effort. 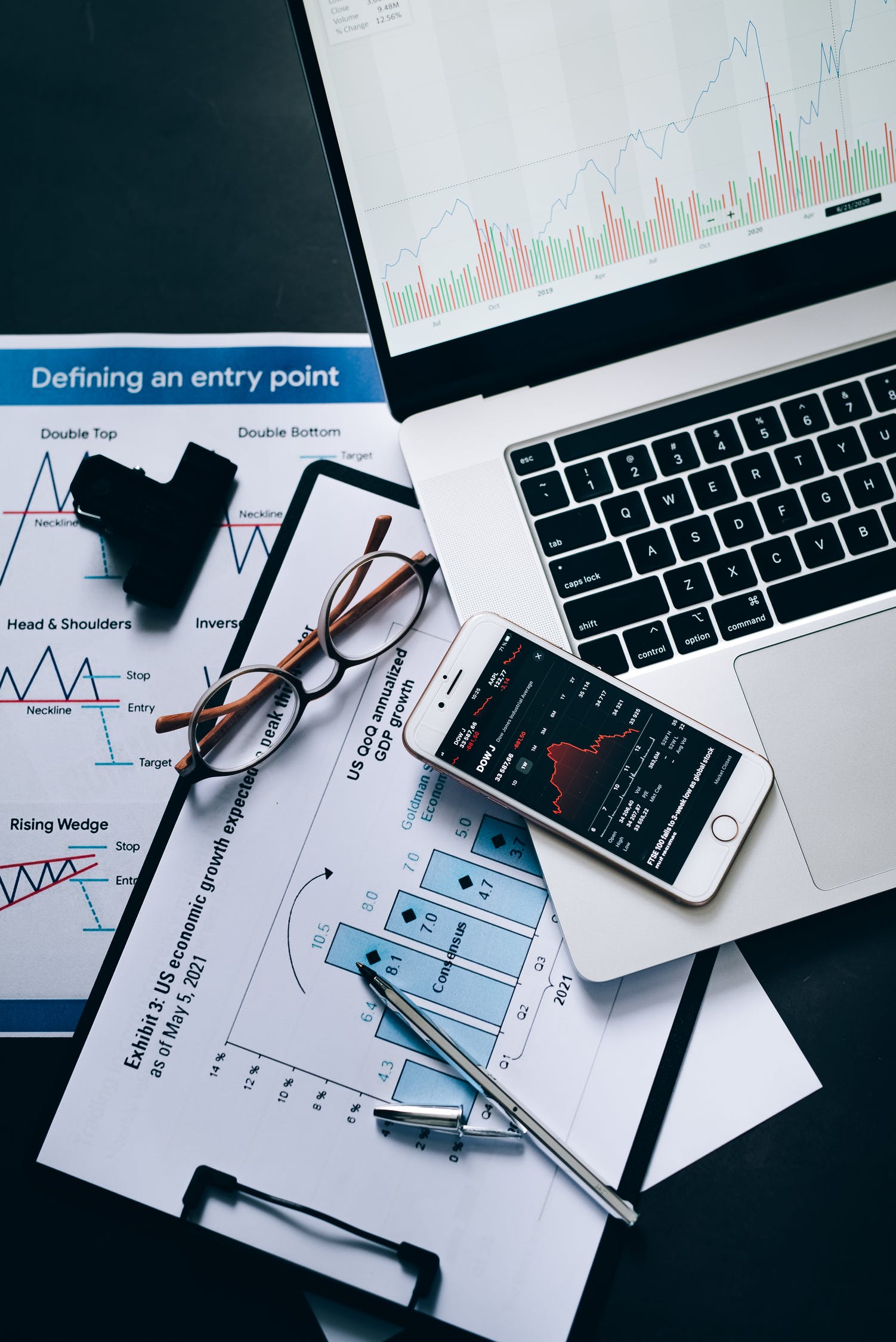 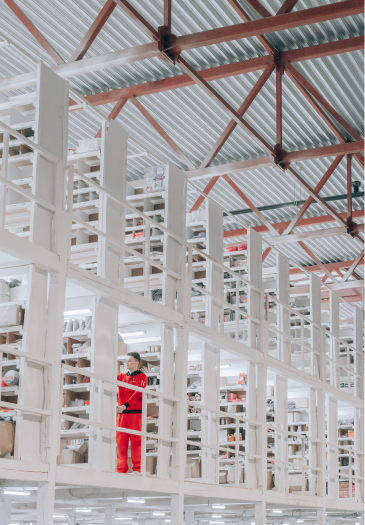 Dropshipping software
VIEW CASE
VIEW CASE
PROGRESS LINE
Once you’ve outlined your initial requirements, we jointly work with you on diving deeper into your product vision and assumptions.
We determine your project development milestones early in the project so that you can keep track of our progress.

01
GATHER REQUIREMENTS
We start off by taking a full 360 degree view of your business needs, goals and objectives to define all the requirements with you down to the last detail.

02
PROTOTYPING & UX/UI DESIGN
Through prototyping stage we validate ideas providing you with the product overview from the outset whereupon we proceed with the UI design, reconciling your vision and our expertise

03
ARCHITECTURE DESIGN & DEVELOPMENT
After the development plan is mapped out, we proceed directly to the development of your software product delivering constant visibility throughout the working process.

05
DEPLOYMENT & TRANSFER PRODUCT
Go live! It’s the final stage of the whole process when an idea turns into a ready-to-use product. Here we launch the project and hand it over to you.
TALENT PORTAL FOR JOB-SEEKERS AND HEADHUNTERS
A source intended to make talent research more efficient through a multi-level filter and boost job chances for the applicants.
READ MORE

ONLINE SHOPPING FOR THE LATEST CLOTHES & FASHION
An online store for a famous brand in Spain with a range of women's and men's clothing of the latest fashion trends for everyday wear.
READ MORE 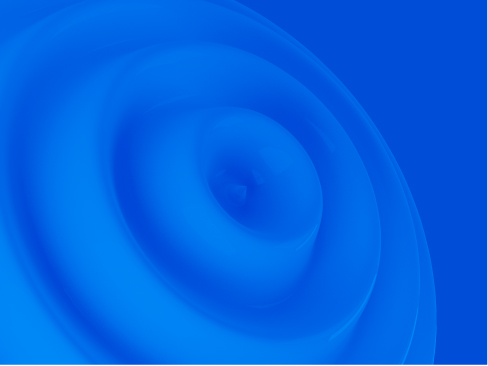 ON-DEMAND MARKETPLACE FOR CONSTRUCTION
An advanced web app with an easy way to select services and products for buyers and a flow of customers for sellers.
READ MORE 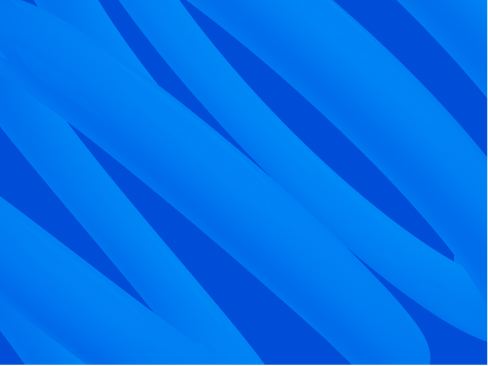 SOCIAL COORDINATION APPLICATION
А coordination app for getting together online seeing how the plans evolve through a conversation.
READ MORE

ONLINE APP FOR BANKING & INSURANCE SERVICES
App used to provide cardholders with the opportunity to open accounts and enjoy a simplified fund transfer process.
READ MORE
FREQUENTLY ASKED QUESTIONS
We have gathered all the frequently asked questions, and if you still have any other ones, just contact us and our managers will get back to you will all the additional information.
Contact us

WHEN IS OUTSOURCING A GOOD OPTION?
Outsourcing is turned to the thought-out business decision when it comes to onboarding the team for only one project term and the time & money spent for hiring in-house become irrational. Cost-effectiveness could also be reached by referring to the expert company that specializes in a required business domain or tech stack. Thus you gain an absolute advantage by getting the right combination of the expertise and high productivity level they will demonstrate.
HOW LONG DOES IT TAKE TO START A PROJECT?
The project development could be started in 2 weeks and beyond, depending on how fast we will gather your requirements and define the project vision that will be used as the basis for the formal definition of what the project is, thus, active communication and involvement is a key factor here.
HOW DOES COMMUNICATION PROCESS LOOK LIKE?
We provide a clear vision of the progress by regular online meetings where we reply to all of the questions that may occur and share further steps. If we work with your in-house team, we adapt to the process you adhere to and use communication instruments appropriate for you, be it Slack, Skype, Zoom or Google meet, etc.
HOW DO YOU MAKE SURE MY INTELLECTUAL PROPERTY STAYS SECURE?
We always sign a Non-disclosure agreement with our specialists and from the outset we sign NDA with you, thus, only the professionals involved in the project have access to the code. We take care of dedicated backup solutions to save data on external data clouds and adhere to all standard security and encryption procedures in the process.
СAN I ADD YOUR SPECIALISTS TO MY EXISTING TEAM?
Of course! We could help you not only build your product from scratch, but also build a part of it, therefore, if you start software development with your in-house team and require additional help from both, management or technical side, we could join your team at any stage of the product development. It is also worth noting that having vast remote experience, our specialists know how to effectively interact and communicate with the remote team using modern communication tools.
LET’S CONNECT 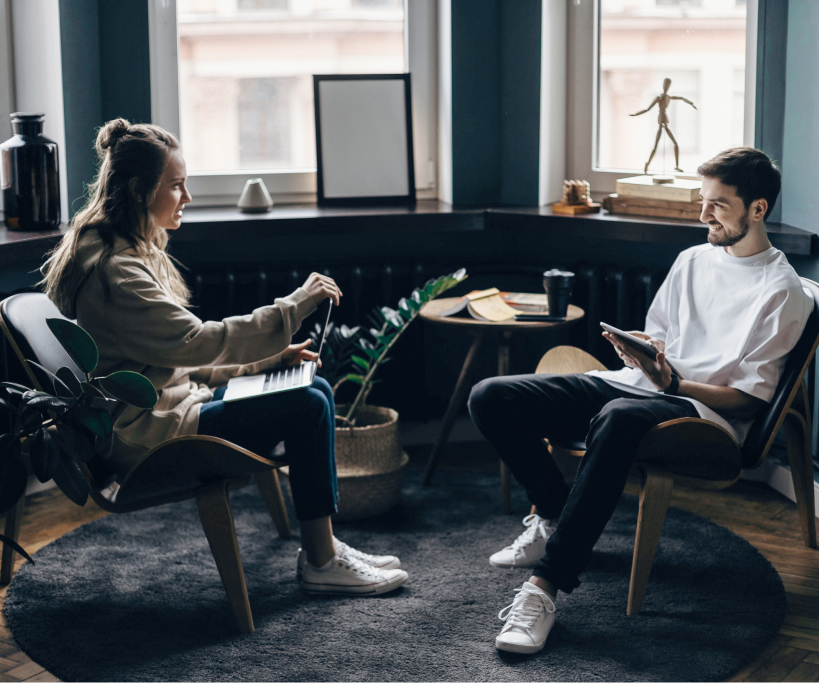